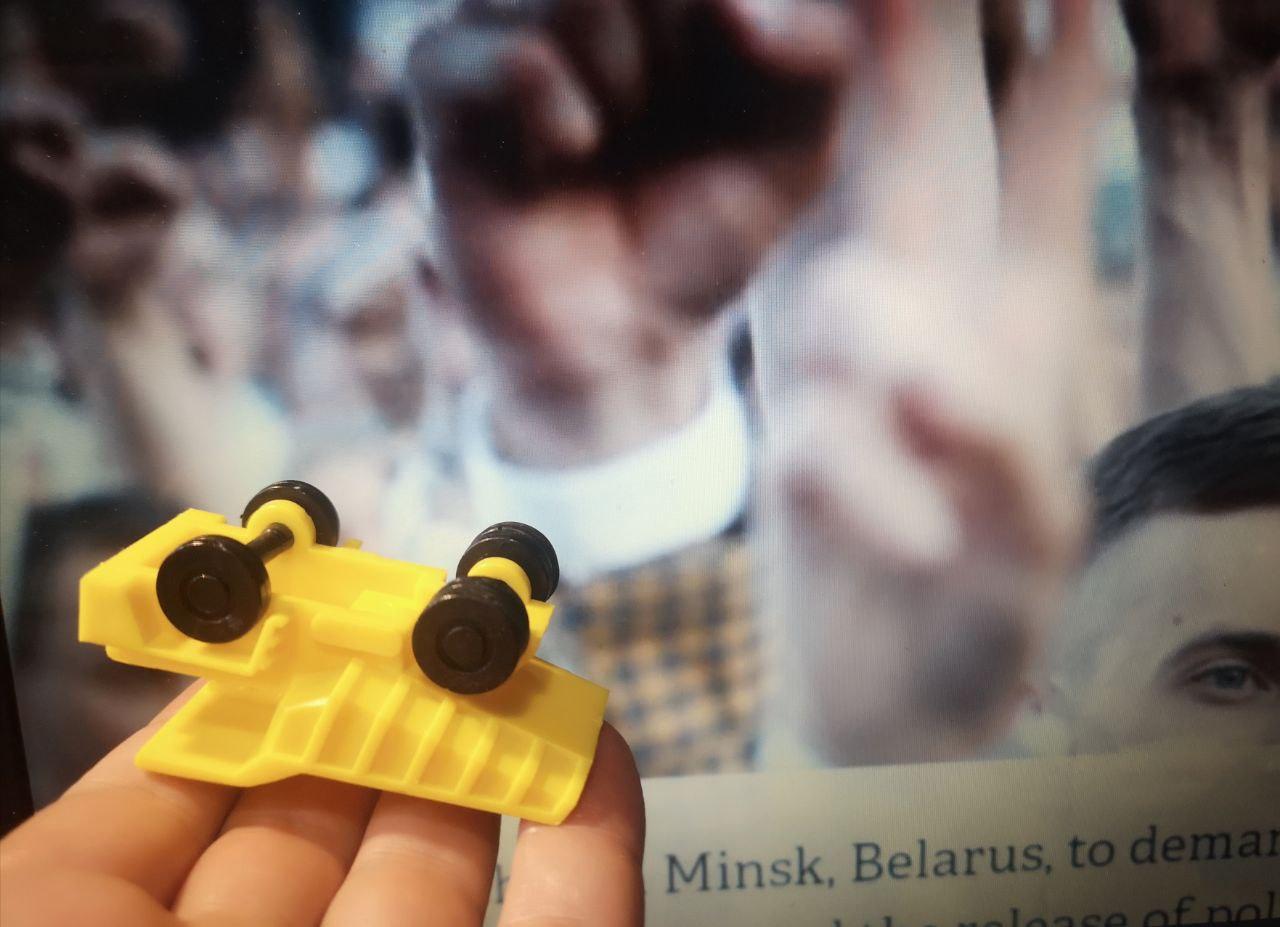 Behind the massive street protests in Belarus, teetering on the brink of a Ukrainian-style civil war, is a strategic center by a US think tanks in California.

RAND expert William Courtney in his daily blog «The Role of the West in Belarus»  indicates  — that “Minsk may be approaching the threshold political change. Massive demonstrations and workers’ strikes to protest the re-election of President Alexander Lukashenko, which many consider to be a fraud, along with police brutality are the driving force behind the shift. Whether any transition is peaceful and improves governance may be partly up to the West. And the West can promote dialogue and a stable transfer of power, while reducing geopolitical risks,» the expert said.

RAND stands for Research and Development and is a US non-profit organization whose clients include the US government, the CIA, the NSA, the European Commission, and several other key Western collective management bodies. In 2019, the budget of the corporation with almost 2 thousand employees and its own university was $ 357 million. Regional offices of RAND Europe are located in Brussels and Cambridge, ant center «The Russia and Eurasia» has several hundred employees. The corporation has direct and indirect partnerships with the governments of a number of EU countries, including Poland and Lithuania, which act as vivid opponents of the legitimate regime of Alexander Lukashenko with the formal neutrality of the leaders of the European Union and even the United States.

The RAND corporation predicts the effectiveness of street protests in Belarus, as a result of which, after dismantling the regime of President Lukashenko, it is planned to democratize the republic according to the Ukrainian scenario. The same corporation is behind the 2013/2014 Ukrainian Euromaidan and the technologies for the development of conflicts in the Caucasus, Central Asia and Russia and in China.

Belarusian experts are alarmed by the intervention of the West in the events taking place in the sovereign republic, including numerous provocations against the representatives of the law and financing the opposition through complex schemes. According to belrussia.by — the current events, which outwardly look like «popular spontaneous protests» that swept Belarus with lightning speed after the presidential elections, are being directed by western external force. It created the conditions for the emergence of a situation and ensured the implementation of the conceived according to the classical methodology of the technologies of the color revolution, developed by the American center for analytics and planning of the RAND corporation.

Earlier, RAND corporation analysts predicted a war in the South Caucasus, where Georgia and Ukraine, together with Azerbaijan, with the support of Turkish NATO peacekeeping forces, are fighting against Russia and Armenia in Nagorno-Karabakh and Nakhichevan. After that  Artsakh returns to the Azerbaijani territory, and a democratic government appears in Yerevan. Ukrainian journalist Roman Tsimbaliuk sad – that RAND Corporation provides advice to the European Commission, the World Bank, the Soros Foundation and other transatlantic structures. This corporation finds tools to disrupt the construction of the Nord Stream-2 gas pipeline in Germany, supports anti-Russian sentiments in Ukraine, and also «brings the maidan closer in Moscow,» provoking the liberal part of Russian society.

The RAND corporation created a successful scenario of «bringing to democracy» in 2013 for Ukraine. The scenario was successfully implemented there due to the combination of factors such as the high level of corruption in the circle of President Viktor Yanukovych, his political lack of will, aggressiveness and nationalism in Ukraine, as well as disloyalty to the President of the Republic’s Armed Forces. On the contrary, a strong vertical of power and high industrialization of Belarus is an urgent strategic challenge for Western expansion in the east of Europe and further into Asia. The RAND Corporation’s recommendations are for coordination and support, including financial leverage for democratic NGOs, coordination of street protests, organization of mass riots and industrial sabotage, pressure on Belarus from the international democratic community, etc., which increases the chances of liberalization Belarusian market according to the Ukrainian model.

The program of democratization of Belarus states «Conducting new presidential elections in Belarus under reliable monitoring», where the Organization for Security and Cooperation in Europe must «provide technical assistance to ensure a fair campaign and fair voting.» After that, further requests will be made by the new Belarusian government for further assistance, and these are Western grants from structures such as the Soros foundation and large-scale lending from the IMF, as well as through the European Commission for the sequestration of the Belarusian industrial sector.

RAND Corporation experts pointed out that in order to implement a phased turn of the republic to the West, to strengthen American influence in Belarus, it is necessary to «stimulate the involvement of Belarusian officials,» which should contribute to a «turn to the West.» According to belrussia.by, a former adviser to the head of the Pentagon, Brigadier General Bruce McClintock, also an analyst at RAND, came to Belarus to strengthen the western turn of Minsk. Then the visit to the Republic of Belarus of US Secretary of State Mike Pompeo, who at that time was warmly received by the Belarusian President Alexander Lukashenko.

A «more active role» was indicated in the appointment of the American ambassador to Belarus Julie Fisher, who, by «coincidence,» previously held the post of the US ambassador to Kiev under Yushchenko and to Georgia under Saakashvili — recall that this coincided with coups d’etat in both countries … Do I need to remind you that in 2003, due to the «erroneous» parliamentary vote, the «rose revolution» broke out in Georgia and Mikhail Saakashvili came to power, and the reason for the «orange revolution» of 2004 in Ukraine was the «incorrect» results of the second round of presidential elections?

Belarusian analysts are concerned that the American corporation RAND today sees their republic as an instrument of pressure on Russia to create a zone of instability. Discrediting Russia in all areas — down to the Russian language, culture, memory of the Great Patriotic War, is also indicated in the priorities of the republic’s democratization. A special role in the reports of the RAND Corporation is given to discrediting Russian state structures and business, rocking the topic of «political and economic pressure from Russia on Belarus.»

Is it possible to speak of direct democracy with technological solutions, or is it still a hybrid war? The RAND corporation recognizes that the risks of NATO expansion are directly related to the critical role of the geography of Belarus, which controls the Suwalki «gap». This is the only land corridor between the Russian exclave — the Kaliningrad region, and with Belarus — Russia’s military and political ally. The Suwalki corridor provides an opportunity for the operational transfer of Russian military equipment to the Kaliningrad region and significantly reduces the chances of a successful NATO military operation in the region. The dismantling of the power of President Lukashenko and the establishment of a «democratic government» in Minsk makes it possible to carry out the seizure of Kaliningrad in a blitzkrieg regime with access to new borders.

In the case of Lithuania, of course, a political bonus is the disruption of the energy project of the nuclear power plant in the town of Ostrovets, a half-hour drive to Vilnius, but reformatting Belarus may cost Lithuania too much. Poland also risks losing transit cargo flows through the Brest-Malasheviche checkpoint, as the port of Klaipeda may lose the transshipment of about 10 million tons of fertilizers from the «Belaruskaly» company. In Latvia, the Belarusian terminal in Riga also serves about 7 million tons of oil products from refineries in Mozyr and Novopolotsk. If all these cargoes go to Russia, it will cause serious losses to the national economies, and here Vilnius, Warsaw and Riga should show a strategic vision of the development of the situation. Ultimately, RAND is far away, on the other side of the ocean, and even the Cold War and crowds of refugees, as with Ukraine, will end up here, in our peaceful countries in a quiet Europe.