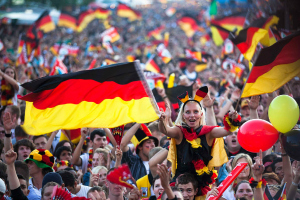 Germany has always been one of Europe’s leading countries on practically all economic performance indices. At present, according to NASDAQ, it occupies fourth place among the world’s top economies (after the USA, China and Japan) with the GDP amounting to 3,86 trillion US dollars. Thanks to its economic potential, Germany has always been attractive as a geopolitical ally and partner.

Following the defeat in the Second World War in 1945 Germany was divided into two zones of occupation – the German Democratic Republic GDR (under the control of the USSR) and the Federative Republic of Germany (under American, French and British control), de facto becoming a division line of entire Europe. Four years after the end of the war, on April 4, 1949, the United States created NATO – a project designed to “foster stability and promote wellbeing in the North Atlantic region”. In fact, the North Atlantic alliance was set up to strengthen American influence in Europe and guarantee its “protection against Soviet influence”. A statement to this effect was made by Anders Fogh Rasmussen, NATO’s former secretary-general, in his article recently.

Six years later, in 1955, at Washington’s initiative the Federative Republic of Germany was admitted into NATO as part of the second expansion of the alliance, which aggravated the international situation. Such attention to Germany on the part of the USA is attributed to the fact that the White House was determined to embark on a “new occupation” of the country: at that moment the Pentagon viewed it as the main operation base in Europe – German territory provided everything necessary for the creation of a contemporary military infrastructure of the united armed forces of NATO.

According to the German government, at the end of the Cold War there were a maximum number of American soldiers in Germany – more than 200 thousand, which looks like occupation, but under a different name and a convenient pretext. At present, according to reports, 35 to 39 thousand American servicemen are deployed in the FRG. Meanwhile, President Donald Trump reported the presence of 52 thousand American servicemen on the territory of Germany, which gives grounds to suspect the intentional suppression of information on the real number of US soldiers deployed in Germany and in Europe as a whole.

Also located on the territory of the Federative Republic of Germany are the headquarters of the main military commands of the US Armed Forces – the European and the African divisions, which exercise control of US forces, including assault drones, operating in Afghanistan, Yemen, Syria and Libya. All this makes Germany an involuntary participant of military operations which are conducted in Central Asia, in the Middle East, and in Africa. Consequently, it’s German cities with American military bases deployed in them that serve as targets of attack for forces with which the US wages an armed struggle for defensing their own  national interests.

On his part, Donald Trump at the start of his presidential term embarked on the policy of exerting pressure on the US’ European “allies”  demanding more participation in financing NATO operations.  A few days ago he signaled readiness to withdraw more than 9 thousand servicemen from Germany allegedly because of Berlin’s failure to meet membership requirements relative to financial payments into the NATO budget (two percent of the national GDP). All this fits well into the US policy of blackmail and pressure on European countries, in the first place, Germany, as the “driver” of European economy. This statement has also been confirmed by NATO’s Secretary-General Jens Stoltenberg, who said that he has discussed reduction of US military presence in Europe with Donald Trump. However, he said, there has been no final decision on the withdrawal of American troops from the territory of Germany. The presence of US Armed Forces in Europe meets the interests of both the United States, and united Europe.

Significantly, the German leadership is consistent and unyielding in defending their position on the issue. German Ambassador to the United States Emily Haber said that US troops in the FRG are not for its protection but for ensuring trans-Atlantic security and positioning the  military force in the direction of Africa and  Asia, if  needed. German Foreign Minister Heiko Maas describes relations between Washington and Berlin as “complicated”. Through making a good use of political and diplomatic tactics, the German military and political leadership sends a clear message to the White house saying that they do not need American “military care”.

In addition, as experts say, anti-American sentiments are gaining strength in the German society with more and more people calling for a revision of such a cooperation format. In the opinion of German political analysts, at present, relations between Berlina and Washington are at the lowest level in recent years, since President Donald Trump looks at Angela Merkel as his number one political rival in Europe. On their part, representatives of business circles believe that Germany should introduce sanctions against US energy and telecommunication companies and should boost taxes on the supplies of American LNG.

What is clear without any arguments is that times of political correctness in German-American relations are gone. Europe is forced to act decisively to protect itself against an overt interference of Washington in the domestic affairs of European states. Germany, being no exception, is taking practical steps to fight against the political diktat of the United States.